Help put an end to taxation. These trifolds are a common sense reduction of the whole idea that taxation is theft, presented in a way that is attractive and beneficial to every American.

We are sending these out for free to anyone interested in helping us distribute them. However, please consider making a donation as well, so that we can print more and continue getting them into the hands of volunteers around the country! Each pack you order is 100 trifold brochures. If you want your free pack, please use the contact form.

In the interest of full transparency, the full contents of the brochure are printed below, so you can see exactly what's in it. 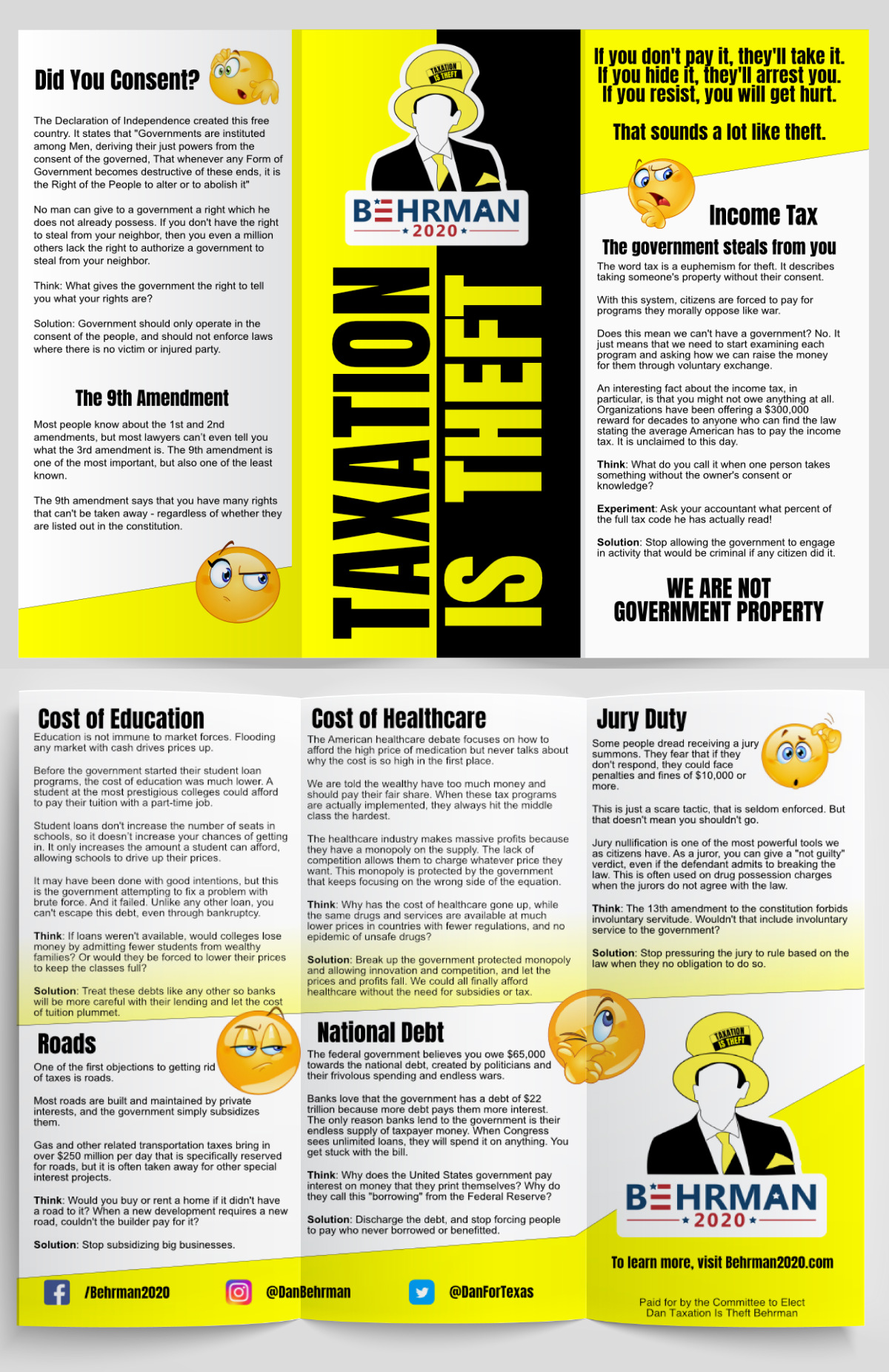 The text is also copied into the body in case you have any issue reading it:

If you don't pay it, they'll take it.
If you hide it, they'll arrest you.
If you resist, you will get hurt.

The government steals from you

The word tax is a euphemism for theft. It describes taking someone's property without their consent.

With this system, citizens are forced to pay for programs they morally oppose like war.

Does this mean we can't have a government? No. It just means that we need to start examining each program and asking how we can raise the money for them through voluntary exchange.

An interesting fact about the income tax, in particular, is that you might not owe anything at all. Organizations have been offering a $300,000 reward for decades to anyone who can find the law stating the average American has to pay the income tax. It is unclaimed to this day.

Think: What do you call it when one person takes something without the owner's consent or knowledge?

Experiment: Ask your accountant what percent of the full tax code he has actually read!

Solution: Stop allowing the government to engage in activity that would be criminal if any citizen did it.

WE ARE NOT GOVERNMENT PROPERTY

The Declaration of Independence created this free country. It states that "Governments are instituted among Men, deriving their just powers from the consent of the governed, That whenever any Form of Government becomes destructive of these ends, it is the Right of the People to alter or to abolish it"

Think: What gives the government the right to tell you what your rights are?

Solution: Government should only operate in the consent of the people, and should not enforce laws where there is no victim or injured party.

Most people know about the 1st and 2nd amendments, but most lawyers can’t even tell you what the 3rd amendment is. The 9th amendment is one of the most important, but also one of the least known.

﻿﻿﻿﻿﻿ The 9th amendment says that you have many rights that can't be taken away - regardless of whether they are listed out in the constitution.

Education is not immune to market forces. Flooding any market with cash drives prices up.

Before the government started their student loan programs, the cost of education was much lower. A student at the most prestigious colleges could afford to pay their tuition with a part-time job.

Student loans don't increase the number of seats in schools, so it doesn’t increase your chances of getting in. It only increases the amount a student can afford, allowing schools to drive up their prices.

It may have been done with good intentions, but this is the government attempting to fix a problem with brute force. And it failed. Unlike any other loan, you can't escape this debt, even through bankruptcy.

Think: If loans weren't available, would colleges lose money by admitting fewer students from wealthy families? Or would they be forced to lower their prices to keep the classes full?

Solution: Treat these debts like any other so banks will be more careful with their lending and let the cost of tuition plummet.

One of the first objections to getting rid of taxes is roads.

Most roads are built and maintained by private interests, and the government simply subsidizes them.

Gas and other related transportation taxes bring in over $250 million per day that is specifically reserved for roads, but it is often taken away for other special interest projects.

Think: Would you buy or rent a home if it didn't have a road to it? When a new development requires a new road, couldn't the builder pay for it?

The American healthcare debate focuses on how to afford the high price of medication but never talks about why the cost is so high in the first place.

We are told the wealthy have too much money and should pay their fair share. When these tax programs are actually implemented, they always hit the middle class the hardest.

The healthcare industry makes massive profits because they have a monopoly on the supply. The lack of competition allows them to charge whatever price they want. This monopoly is protected by the government that keeps focusing on the wrong side of the equation.

Think: Why has the cost of healthcare gone up, while the same drugs and services are available at much lower prices in countries with fewer regulations, and no epidemic of unsafe drugs?

Solution: Break up the government protected monopoly and allowing innovation and competition, and let the prices and profits fall. We could all finally afford healthcare without the need for subsidies or tax.

The federal government believes you owe $65,000 towards the national debt, created by politicians and their frivolous spending and endless wars.

Banks love that the government has a debt of $22 trillion because more debt pays them more interest.
The only reason banks lend to the government is their endless supply of taxpayer money. When Congress sees unlimited loans, they will spend it on anything. You get stuck with the bill.

Think: Why does the United States government pay interest on money that they print themselves? Why do they call this "borrowing" from the Federal Reserve?

Solution: Discharge the debt, and stop forcing people to pay who never borrowed or benefitted.

Some people dread receiving a jury summons. They fear that if they don't respond, they could face penalties and fines of $10,000 or more.

This is just a scare tactic, that is seldom enforced. But that doesn't mean you shouldn't go.

Jury nullification is one of the most powerful tools we as citizens have. As a juror, you can give a "not guilty" verdict, even if the defendant admits to breaking the law. This is often used on drug possession charges when the jurors do not agree with the law.

Solution: Stop pressuring the jury to rule based on the law when they no obligation to do so.